Tell me a fact and I’ll learn. Tell me a truth and I’ll believe. Tell me a story and it will live in my heart forever. – Native American proverb

In a 2012 article for Inc.com, Geoffrey James wrote about a seven-step process for telling a great story. The process is the property of Mike Bosworth and Ben Zoldan, as explained in their book about business storytelling. It’s a great system. Let me explain briefly the seven ingredients for storytelling greatness. As I go through these steps, I’ll weave in the Airline Pilot Analogy, an incredibly effective message.

Watch this video episode or read the transcript below to learn the seven steps to crafting a great story, and the Airline Pilot analogy.

The first step in great story telling is to decide what message you want the listener to take away.

The second step is to employ an ending to the story or analogy that verifies the takeaway.

The third step Bosworth and Zoldan urge is to move the story in the right direction by giving it life. Discuss the people involved, the location where things take place and when the story takes place.

The fourth step is to put some meat on the story’s bone by adding rich context.

Step 5 is when you introduce the goal you seek and the obstacles confronting you.

Step 6 is to describe the decision that allowed someone to overcome the obstacles.

Step 7: Now we finish the story and invoke our takeaway.

Mr. Smith is thinking he can manage his own account and save a lot of money in fees and commissions. You know that’s the wrong thing to do. You want him to hire you. You know he’ll be better off with his money in the hands of a competent Financial Advisor. (Step #1: Decide what message you want the listener to take away).

Let’s tell the Smiths a story about overcoming the obstacle of poor results (making the right decision) and give the story lots of life and rich context.

Mr. and Mrs. Smith, Let’s say that next month, the two of you need to fly from Los Angeles to New York. On the appointed day, you get to the airport in plenty of time. As conservative people, you do not want to be running through the airport at the last minute. You get through security, walk to your gate and board on time.

That’s also what you want when you invest your hard-earned money. You want to get to the proper destination, on time, safely. The various investments are your airplane and I am your pilot.

Hear hundreds of stories, analogies and power phrases designed to help you simplify your message and better communicate with prospects and clients – get Say It So It Makes a Difference, mp3.

There are two obstacles I will face as your pilot.

Obstacle number one is that I did not build the airplane. YXZ mutual fund or ETF Company built the airplane. So enroute, if we encounter mechanical difficulty, such as a dividend being cut or the account falling temporarily in value, don’t get mad at me. I am simply the pilot. They built it.

Secondly, as a pilot, I am not paid to predict the weather. I am paid to react to the weather. I know there will be rough patches ahead. I just don’t know when. If I knew, I would take action now. I can’t do that. I have to take action at the time.

So there may be times when I tell you look out the window at a very placid scene. Or I may come on the intercom and tell you to fasten your seatbelt because we are encountering rough weather. But when this journey is over, I’ll get you where you want to be, on time, safely.

Your goal is to get to New York safely and, hopefully, on time. Imagine getting to the gate and finding there are two planes going to New York. One has a pilot and one doesn’t. You would absolutely choose the plane with a qualified pilot.

If you are serious about developing outstanding storytelling skills (and you should be), join Don Connelly 24/7.

There’s a whole section dedicated to helping you use stories, analogies and power phrases to simplify your message and communicate with prospects and clients in a totally understandable and straight-forward way. Watch the intro video below.

We recommend the PLATINUM membership for its best value for money 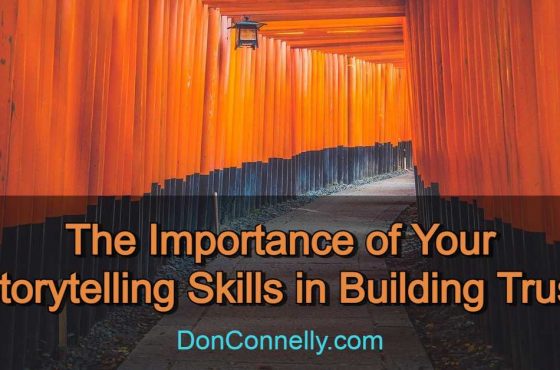 The Importance of Your Storytelling Skills in Building Trust 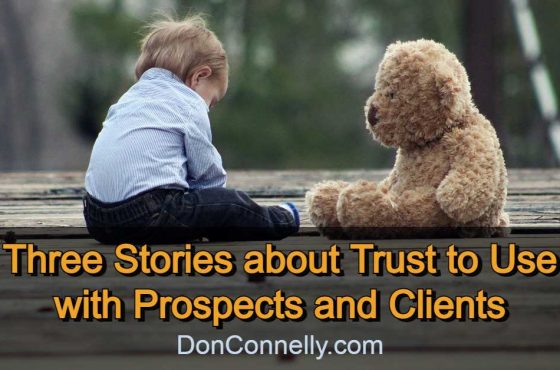 Three Stories about Trust to Use with Prospects and Clients

How to Build Your ‘Why I Am Here’ Story

You can still save $250 on our coaching program & transform your practice by the end of Q1!

Have you been trying to take your business to the next level but not quite achieving the success you want? Do you have trouble clearly articulating your value? Are you finding it difficult to attract referrals and new clients? Would you benefit from an accountability partner? If you've answered YES to at least one of these questions, our 'Become Brilliant at the Basics' 12-week coaching program is just for you and only until Jan 19 you can save $250 on the registration fee.